Cemeteries, Superstitions, and Too Many Bugs 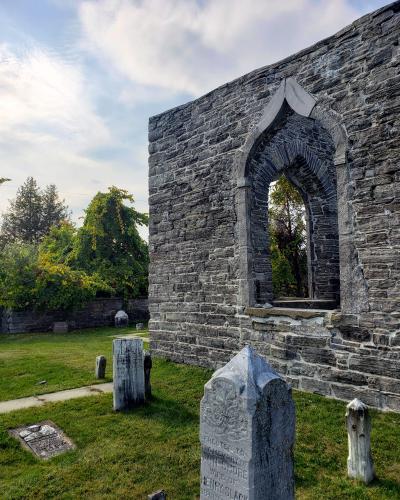 “As scholars, we cannot ignore the reality that, just because this data is in the public arena, it is also open and free to use, and that permission has been granted for its harvesting, analysis and dissemination.”1

At the beginning of the week, my qualms were in the realm of ethics, but now as I’m writing this having completed the majority of my field work, they are entirely physical…

Interestingly, I was initially more concerned about the ethical aspects of documenting a cemetery than the ethics surrounding digital archaeology. I found the Dennis article assigned to us this week intriguing in the perspective it gave surrounding considerations of privacy in a digital world and the usage of digital tools throughout the greater field of archaeology. Maybe this is a generational difference, with me being someone who grew up both during the rise of social media and rapid technological development, but I found some of the concerns raised about these topics… unconcerning? I don’t blink at the warning that everything about me can probably be found online because I grew up being told this message– even “personal” things like my medical records are digitized and could technically be accessed by anyone with the right know-how, and because of this, the lines between public and private in this digital world feel completely blurred to me. I think I fall on the more extreme end of “not caring”, but this belief extends to my work– if it’s digitzed it might as well be made public. Dennis discusses how the performative nature of my generation’s reflective work, if made to be public, could hinder future opportunities; but, as the world becomes increasingly digital this shift has also changed how an applicant’s work can be seen. A reviewer can see the date stamp attached to a post, and acknowledge that the work isn’t recent. If anything, I personally like having my work public because you can look at my first reflection on this blog up to my lastest one and see how I’ve progressed or how my views have shifted. The other ethical considerations mentioned in all our readings felt familiar; considering your tools, your bias, who or what you are studying and the associated histories– is all something I’ve learned as a history student and know to be mindful of across everything I study and encounter in life, because everything has some sort of history attached to it.

Now, the ethics surrounding studying a cemetery… the family I grew up surrounded by are French-Canadian Catholics hailing from rural Québec who continue the tradition of just about as much unusual superstitions as you’d expect. As per that influence, the first time I read the project instructions when helping Dr. Graham review the the course site, there was a little voice in the back of my head reminding my that spirits are always watching from above and cemeteries are not a place to reckon with should I want to remain unhaunted. The logical part of my brain can argue this all it wants, but superstition is ingrained within me, and although I could move past that initial religious reasoning, I still felt bad about “disturbing” the dead– I mean, how annoying would it be if you’re just trying to RIP and then some history student shows up and starts walking all over you taking pictures and measurements for like, 6hrs?

Jokes aside, with that train of thought more ethical questions continued to pop up in my mind, very much within the same line of thought expressed by the Richardson quote I chose to start this reflection with. Is what’s public really intended to be public? Many historic cemeteries require some form of permission to access, but they’re still public in the sense that technically, anybody could access them. I then thought, since a person chose to be buried with a headstone that can have all sorts of information on them, does it mean that they consented to or wanted themselves to be commemorated? Does it inherently indicate a desire to be remembered? But did they want to be remembered in this way, as in, through an archaeological survey? Their graves photographed and preserved via a technology they couldn’t even fathom? Of course, I can never get an actual answer to these questions so I just had to accept the enthusiastic “YES” from the woman who managed the cemetery I chose to document at Pinhey’s Point– although I still worried about exploiting the dead who had no say in the matter (and who might haunt and/or curse me…).

In the end, my ethical quandaries ended up being quashed by the physical ones. The first day I arrived on site, with water, snacks, a camera, a portable charger, and my iPad in hand, I was met with a beautiful cemetery lovingly maintained by a woman named Meg who invited me there and her husband. No spirit would haunt me if it meant having to leave a place as pretty as this, I thought. Unfourtunately, I happened to time this first visit with a very rare weather phenomena for the area– there was no wind despite being situate right beside the Ottawa River, and it had just rained. I entered the cemetery and began labelling and filling in the blanks on my sketchmap where google maps had failed me. There had been a swarm of small bugs following me since I had exited the car, but I assumed they’d quickly dissapate. I was very wrong. Instead, midges began to join the party, then mosquitoes, then black flies, until I could no longer stand still, because otherwise the swarming would intensify. I called it quits when it got to the point where I was struggling to see because the bugs started going for my eyes…

My second and likely final visit this Saturday went much better– this time I came equipped with bug spray and a stool, so I could actually take pictures of the top the tombs! Weather was hot, there was a strong breeze, and it was sunny but overcast– perfect for gravestone photography! The main hazard was an obscene amount of yellow jackets (literally, I have never seen so many in my life) resting or hovering along the walls surrounding the cemetery and church ruins, but they didn’t seem to care for me at all, only occasionally whizzing by my head on their way to church. In total, I was able to document the basics of 67 monuments in what felt like no time at all! But! You may notice the time at which this is posted and think “ah, the life of a university student”, yet the reality is that the final physical danger I encountered in my first foray with field work is that I never checked the expiry date on my sunscreen. And because I’m so pale, this of course has resulted in most of my Sunday being spent recovering from sun poisoning. In my defense, studying both history and computer science doesn’t give me a lot of experience with going outside.

Now, if you’ll excuse me, I’m going to go back to bathing in aloe and chugging gatorade.