Let's do the Map Warp Againnn! 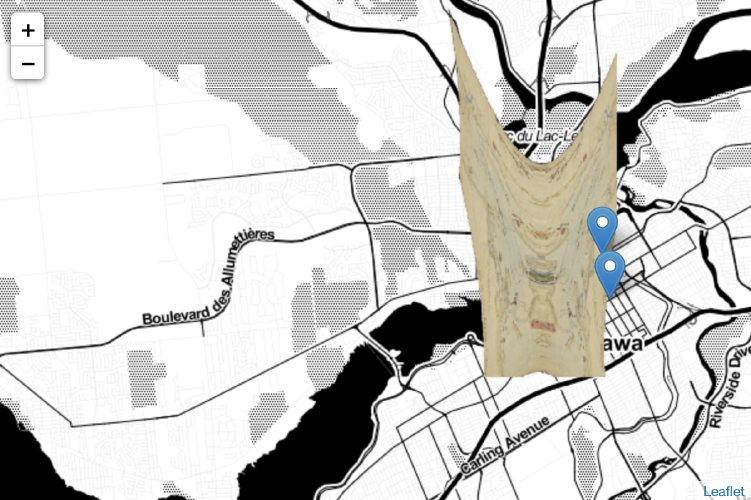 “Connectedness to our own humanity, reexivity toward our own emo-tional states, and an extension of human compassion that transcends time much as it transcends cultural divides in the present all make possible a different kind of archaeology where emotion is integral to the human experience past and present.”1

Update: Who knew sun poisoning could take 3 whole days to recover from? Dehydration doesn’t mess around– my brain was mush and only reformed on Wednesday, which meant that this whole week was a game of catch-up and frankly, ended up being a bit of a fail.

It was one of those weeks where nothing was really going right; I was in a constant battle with technology. It first started with my attempt to upload the data collected to using kobotoolbox. My laptop was NOT happy with me when I tried to open even just one of the pictures I took at Pinhey’s Point cemetery– probably due to the fact that they were RAW files– which made it difficult to sort through and identify each individual gravestone. Now, I’ve just built a desktop computer for this exact reason, so although it’s been having some odd issues with Wi-Fi connection, I thought to myself “it’ll totally be fine to use for this.” Why did I think this when I was meant to be filling out an online form? Who knows.

At least at my desktop, I had no problem sifting through the photos, narrowing down my collection to all graves with the latest death date of 1905. It was here where I was able to take a closer look at each monument (my laptop also didn’t like when I tried zooming in…), and some emotion beyond a fear of being haunted began to set in. There were some funny finds– I found one stone where the mason evidently messed up the carved date of death and tried to poorly correct it– but overall, Old St. Mary’s is largely a family cemetery, meaning that families were typically buried in close proximity, which was especially true in the 19th century (later years they began to be more spread out).

While looking at the details of each grave, I’d come across the stones of couples buried together after living until they were over 60, but then the next picture would be in abrupt contrast to this as it featured the graves of their children, who frequently passed away at a young age– one paticular grave commemorated the death of a 20-year-old son and a 7-month-old daughter, who passed the same year only 4 months apart. These tragic familial connections evoked feelings similar to what Baxter described in her article while studying how children were commemorated in the cemeteries of Chicago. The stones for the children at Pinhey’s Point were simple yet beautiful– you can tell they were loved– and so one can’t help but sympathize with the parents, imagining the devastation they must have felt in outliving their children. Additionally, while some families elected to have “family” stones where the individuals were commemorated all together on one large monument, there were some who chose to have more modest, separate headstones. Due to the fact that I decided to formally record graves only from 1905 or earlier, occasionally I would only be documenting the wife or husband who died earlier than their spouse, and oddly this was also something I struggled with. I felt almost guilty “separating” these couples when porting them into the digital sphere– they chose to be buried next to each other in an act of what some stones described as “eternal devotion”, so who was I to make them part just because one didn’t meet my death date criteria?

I processed through these emotions as I processed and recorded each picture, and when I was done I felt a new emotion when I realized that none of my forms could be uploaded. I figured that because I was able to load the form from my bookmark, and my computer was indicating that it was connected to the internet, it was, in fact, connected to the internet. Apparently, no. I then went to plan B, which was a field trip to Canada Computers to buy an ethernet cable long enough to span my basement to connect to the router– their website said there was some in stock! But alas, when I got there, the only cables they had fell just short of the length I needed. So, I guess stay tuned for “Will Chantal ever get her Pinhey’s Point data online or are they doomed to forever sit on her computer?”

The next battle with technology was partially one of my own error. This week, the only activity I was truly able to do was webmapping. I’ve been excited about trying photogrammetry since I first saw it on the course site! But guess who forgot to take overlapping pictures? Hint: it’s me. I had 4 relatively good photos of one monument that I attempted to make a model out of, but sketchfab didn’t like the size of the pictures and neither Meshroom nor Regard3D liked how few pictures I had; I think next week I’ll try manually building the monument when I have more time to learn about Regard3D. The intro to spatial archaeology I simply ran out of time for, but I’d like to give it a shot in the future as I feel it will put the somewhat complex discussions of Gupta and Devillers into greater context.

Although I did the initial webmapping activity in HIST3814, I opted to redo it as a refresher and it yielded some interesting results, as you can see in this week’s header photo. I attempted to warp one of the earliest maps I could find featuring Ottawa, which happened to be a hand-drawn map from 1828. Finding control points when warping it in Mapwarper was actually surprisingly easy– despite not being able to read the written labels, the significant geographic markers such as islands, rivers, and bays were drawn much more true-to-life than I anticipated. Yet when I finally warped the image, the map became a testament to scaling. The historic map imagined an area that was much more spaced out and expansive than what our current map produced by satellites reveals. I wondered if this was due to the modes of transportation available in the early 19th century; if a person took multiple days to traverse an area that would now take us about an hour to traverse by car, it would certainly be perceived as more vast area than it actually may be.

When mapping Old St.Mary’s cemetery I couldn’t locate a map of its layout to overlay it, but once all the markers were placed I realized that it’s almost necessary that I do, because the stamen maps do not scale to the level I need– the points of each grave are floating in a grey liminal space between a digital void and the cemetery actually present at those coordinates. This sort of made me question the inherent authority people place on digital works. This map does have accurate coordinates, let me be clear, but if someone saw this map they would likely trust that yes, this map is accurate. Yet, no geography is present; there are no indications of the graves besides the added points, and nothing to confirm the larger locale because of the loss of imagery due to scale. I could have placed this site anywhere and it may be taken at face value; the limits of this technology can allow for misinformation and misrepresentation that may go undetected, and further, on an emotional level, it would misplace the dead and leave them lost and misremembered.